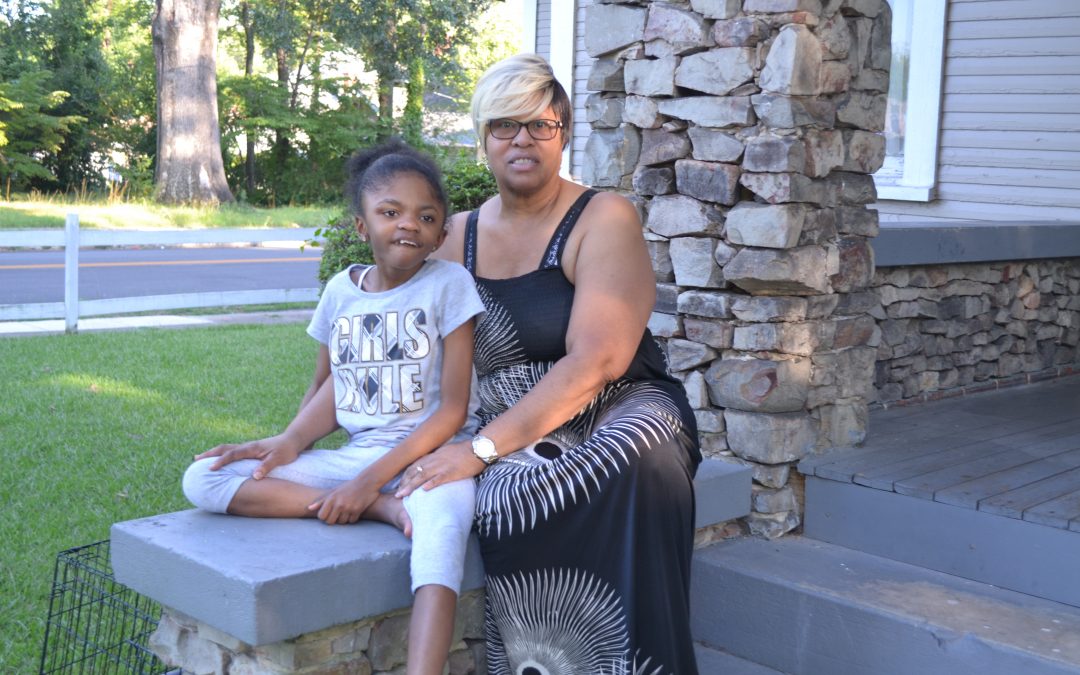 Eleven-year-old Jamiah Lipscomb had already been adopted by a loving family but her special needs panned out to be too much for the family to care for. So, she was placed back in the foster care system.

But her adoptive family didn’t want to give up their parental rights. They loved her. They’d taken care of Jamiah since she was a baby.

“Jamiah was born to very drug-addicted parents,” according to her case manager Ruth Staggs. Consequently, she’s been diagnosed with a long list of medical conditions.

Yet, her adoptive parents wanted to continue to visit her and take her home when they could. But for this to happen, someone else needed to be responsible for the major care of Jamiah. 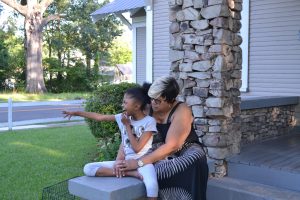 Debra Scott and Jamiah Lipscomb sit outside of their home in Gadsden, Alabama. Photo by Myles Saunders.

After bouncing around a few foster care agencies, in December 2013, Jamiah landed in the home of Debra Scott, a foster parent for Seraaj Family Homes, Inc. who’s fostered 32 children since 2000. Scotts lives in Gadsden, Alabama.

“If she stayed in the system, when she turned 12 they were going to put her in a group home,” Scott remembers the local Department of Human Resources relaying to her. “She’s not group-home material. Someone would hurt her. She’s defiant. I know how to handle that, but someone else is not going to take the time to understand what’s going on and spend time with her and try to get it right.”

Ruth Staggs, who works for SFH, thinks if Jamiah had gone to a group home she would have “disappeared, crashed and burned, and lost everything she had learned.”

Staggs remembers Scotts saying, “If this child can’t spend her life with me, then why did I do what I did? I want this child to be with me for the rest of her life.”

“When Jamiah came to [the agency], she couldn’t speak or communicate (as if hadn’t been around another human being), wasn’t potty-trained, couldn’t sit on her own, [and] all the basic skills were nonexistent,” Staggs said. After speech therapy, occupational therapy, and lots of help from various resources, the agency and Scott, she’s made vast improvements. Now Jamiah knows about 100 characters of sign language, knows how to differentiate colors, can dress herself and make up her bed, and is consistently learning more verbal words. All these improvements were made during the 7 years Scott has fostered and worked with Jamiah.

A year shy of her twelfth birthday, the birthday Jamiah would’ve had to go to a group home, her first adoptive parents finally gave up their parental rights. They made a deal with Scott: They would give up their rights if Scott adopted Jamiah and allowed them to continue to visit her and remain active in her life. That was no problem for Scott. She said she’d been waiting for the chance to adopt her all along.

“In the last few months, I’ve had to go in and correct my documentation because I forgot [Scott] is her foster parent and I was just documenting her as her parent,” Staggs said. “Ms. Scott is extremely dedicated. She’s made sure Jamiah doesn’t want for anything. She’s just an amazing parent.”

On August 20, 2019, the adoption was finalized. This is Scott’s second adoption through SFH.