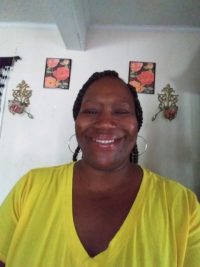 * Click the audio clips to hear some of the most powerful soundbites from this interview.

With more than two decades of experience with fostering children, some with multi-layered needs, Geraldine Jackson says she had never seen a 9-month-old baby look like a newborn until she met her foster son “OJ.” She describes how she could tell that he was close to death from the shape he was in when she met him at the hospital at the University of Alabama in Birmingham, Alabama (UAB). Four years later, he’s come a long way and is more than just surviving. He’s thriving and hitting major developmental milestones.

Jackson, who’s been a licensed foster parent with Seraaj Family Homes, Inc. (SFH) in Montgomery, Alabama since December of 2016, was asked to foster OJ when no one else in the state would. Although she was worried at first, Jackson agreed to take care of OJ as long as she was thoroughly taught how to take care of him.

So, she took a trip to Birmingham to meet her new ward. When she arrived at his room at UAB, Jackson says she felt overwhelmed. Little OJ was unusually tiny and had a tracheostomy tube, a feeding tube, and a shunt because he has spina bifida, among other health issues.

After her trip, Jackson reached out to her brother, who’s a pastor. She says he told her to “give her worries to the Lord and go get that baby.” “That gave me more strength than you could ever imagine,” Jackson said. “I never called on God so much in my life!” She constantly prayed for strength. With faith, a lot of patience, unconditional love, understanding, and hard work, Jackson has helped OJ achieve things some doctors didn’t think were possible, she says.

Jackson says she sat down and made a list of things she wanted OJ to accomplish. First on the list was the ability to sit up on his own. It took somewhere between two weeks and a month for OJ to finally sit up on his own once Jackson started working with him. “I praised God!” Jackson recalls. “And he started to smile. Before, he has just been lying there, not even turning his head.”

Next, she began training him to eat solid food. Initially she had to feed him from the feeding tube 3 to 4 times daily. “When I first tried to get him to eat, he fought me!” Jackson exclaimed. “I had food all over my face! But I gave him some baby peaches and he clamped his mouth together. They were so good to him! He’s been eating everything ever since.”

His doctors were amazed because they said babies who are on feeding tubes often become accustomed to and dependent on it and won’t accept solid food. But Jackson has completely weened OJ off his feeding tube. The feeding tube was removed a month before he turned two, and he’s been healthily gaining weight since then.

While continuing to discover foods that OJ enjoyed, Jackson wanted to get him to start talking. So, she asked her sister how she was able to get her children and grandkids to talk. Her sister told her that she’d have to talk to him more and ask him questions and wait on the answers even if it took all day. She did, and now he’s talking.

Jackson has aided OJ in reaching many other milestones, proving some of his doctors wrong about what he’d be able to do as he grew up. “We got him dancing, playing basketball (in his wheelchair), and singing the blues,” Jackson says. Almost two years ago, OJ started being able to breathe on his own without the help of the tracheostomy tube. Previously entirely dependent on a wheelchair, OJ has also recently started to walk with the help of his walker and sometimes holding onto things.

Jackson’s next goal is to have him walking completely on his own, “even if he has a limp,’ she says. “I want him, by the time he’s 10, to be up and at it. We gotta get his legs strong and I have to stop being the pampering mother. I want him to be able to survive in society on his own.”

Although Jackson is OJ’s main guardian, she says she couldn’t have gotten him to where he is without the support of a village, including other foster parents that provided her with respite. “It took friends, family, [and] people in the neighborhood that lived all the way around the corner,” Jackson said.