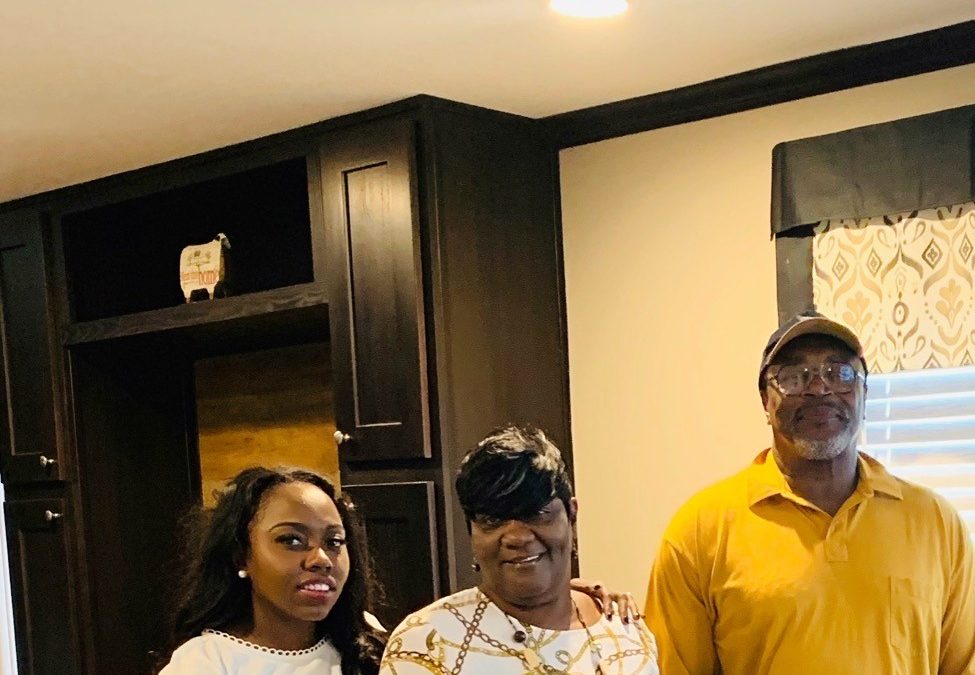 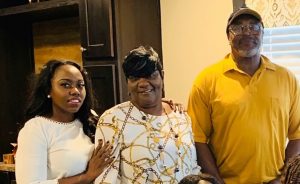 Mr. and Mrs. Dubose with their daughter Krystal Key.

Intisar Seraaj, digital content producer for Seraaj Family Homes, Inc. (SFH), spoke with Krystal Key, one of the adopted daughters from the Dubose family. This is the family of Mr. and Mrs. Willie and Emmie Dubose of Midway, Alabama, who are both foster and adoptive parents for SFH. Key shared very intimate details about herself, the lives of her siblings, and how she feels this family saved them. Key, 28, is a 2015 graduate of Alabama State University and now has a family of her own. She’s planning on earning her master’s degree soon to become a therapist.

Seraaj: What did you study in school?

Seraaj: Mr. Dubose mentioned that he already knew your biological family before they adopted you. Tell me about that.

Key: Yes, [the Duboses] knew them through my brother Rico. He went to them before we went to them. He told them about us (his siblings) and what was going on in [our] last home and he wanted them to get us. He begged them to get us. They weren’t so sure. We stay with them for a weekend after we got released from our old home. We asked Mrs. Dubose if she’d keep us. She really wanted to help us, and they decided to.

Seraaj: So, were y’all with a different agency than Rico?

Key: Rico told them about the things we went through in prior homes. During this visit, Mrs. Dubose fell in love with us and wanted to keep us. So, they discussed it, and soon we were all united with them. We were in Tuskegee at the time. [SFH] got us when I turned 15. My siblings were like 6 and 8. They were going to put us in a group home because they couldn’t find anywhere for us to go after we left our previous foster home due to unforeseen things that happened in the home. The Duboses basically rescued us and kept us from being scattered away from one another.

Seraaj: But what happened with your eldest sister?

Key: They fostered her until she was 18 and then she went off to Alabama State [University]. She really wanted to be left alone. She wanted to be out the system, but she does consider them her parents. But she only sees them “once a blue moon.” I’m still in contact with her.

Seraaj: Can you share with us a little about the home you were in before the Duboses, as you say they rescued you guys?

Key: Well, the man was a reverend. He did a lot of sick things to the children in his home. He used to starve us. My sister wanted to get something to eat out of the refrigerator and he wouldn’t let her. He had locks on the fridge, and she broke into it. He pulled a gun out on her because she wanted to fight him. He worked for DHR (Department of Human Resources). He called them. They came and got her but they asked to speak to us. They called us one-by-one. I was so happy because finally someone was listening to us and we could tell someone what was going on. They eventually got us out of them. We didn’t go straight to the Duboses. They put us in a few different homes. My little brothers got separated. The Duboses could only take a few. They already had [Rico] and he asked them to take us four girls. We did go through a lot of counseling. Everything wasn’t always perfect. But [the Duboses] made sure we got the counseling we needed. They showed us what foster homes are supposed to be like. They treated us like we were their own; We never felt like foster kids their.

Seraaj: Do you remember it being hard for you to trust people after that ordeal with that reverend?

Key: Yes, it was very hard. I went through a dark moment. I was scared of the Duboses at first. I [thought], “We’re going into a home with another male and we don’t know how he is.” I was very protective of my sisters. I remember Mr. Dubose sitting me down after a few months and telling me, “I just wanted to let you know that I’d never hurt you. It’s OK if you want to talk to me. You don’t have to worry about anything. We’re going to protect you.” I’ll never forget that moment.

Seraaj: Do you remember anything else about how the Duboses made you feel a part of the family?

Key: Well, on the first day Mrs. Dubose took us to her daughter’s house and she introduced us to literally everyone she had ever known as her new kids. She asked her daughter to do our hair. It was our first time. She took us to get our nails done. I came [to their home] dressing like a male because I didn’t like showing my body because of what happened [at the reverend’s home]. She bought us clothes out of her pocket before Seraaj, DHR, or anyone gave her a voucher. That touched my heart because that was my first time having [new] clothes and not having hand-me-downs and actually going to the store. She took us out to eat. That was my first time going out to eat. They took us on trips. Our other [foster] parents would put us on respite, but the Duboses let us go on vacation with them. I was shocked. I actually felt like I had a home. They really taught us how to keep up with our hygiene, and how to cook and clean. They prayed over us, introduced us to the church, and got us in the choir.

Seraaj: What are some your favorite dishes you learned to cook from the Duboses?

Key: Mr. Dubose cooks really well. I learned how to cook salmon. That’s my favorite thing to cook with Mr. Dubose. Even to this day, I call him and say, “Daddy, can you tell what to do with this salmon because mine falls apart.” With mom, she showed me how to cook collard greens and cornbread, how to cook cakes, and how to bake pies. Mom showed me a little bit of everything. How to cut and clean [veggies], how to season the food, how to measure, and everything a mom should teach you when they’re teaching you how to cook.

Seraaj: What effect do you think church has had on your life?

Key: It kept my mind off the past: It kept me focused on the present. Mr. Dubose always took what we learned from church and put it in ways that we could understand. They put us is choir because we liked to sing. And they actually asked us what we wanted to do and what we liked before throwing us into [an activity]. No one ever asked us that. That and reading the Bible helped us grow and value family. I went through a dark moment where I just didn’t want to live anymore and they helped bring me back from that.

Seraaj: You mentioned family. When did you get married?

Key: I got married in April (2019). We’ve been together for five years. We dated in high school but we don’t include that. He already had two beautiful boys. He’s about to go off to the Air Force. I’m a personal banker. We are both fulltime, working parents.

Seraaj: Once they adopted your sibling group, did they foster other children?

Key: Yes, they did. That was OK with us. We wanted that. They needed to adopt us in order to help others. Well, at first, I did want to be adopted, but then I was talking to my case manager and they told me that [youth in foster care] get college benefits. So, I wanted the benefits [instead].

Seraaj: When the Duboses would get more foster children, were you all able to talk to them on their own level and give them advice?

Key: Some we were able to reach, others no. The kids they have now, I connect with them because they’re younger and listen. Even with the other kids, [I told them] it’s a good home and they’ll work with you, as long as you follow the rules. Even when rules were broken, the Duboses gave it their all to work with the child. I tell them that they have things that other kids don’t: food on the table, clothes on their back, and their own rooms. When we first got there, the Duboses only have four bedrooms. We all had bunk beds for a year. Eventually, [revealed to us] that they had built every last one of us our own room. I never had my own room. I was crying. That made me feel welcomed and loved. They let us pick what we wanted in the room, what color we wanted the room, and how we wanted to decorate.

Seraaj: What other advice did you give the new foster children on settling in?

Key: I tell the older kids that sometimes, you wish you could have your [biological] parents. You think that they’ll change and wish for them to change but you don’t need to hate them if they don’t come back. We all make mistakes and just gotta move forward. Just appreciate that you’re in a good home now. Mrs. Dubose always told us that we were welcome to see our parents and that they weren’t there to take us away from our parents. I never had an [instance] where I couldn’t see my mom.

Seraaj: I really appreciate this chat with you. We are celebrating National Adoption Month and our chat will be published on our blog along with the interview I conducted with your dad. I look forward to having a more in-depth interview with you, possibly including your siblings. Is there anything else you’d like to say?

Seraaj: One last thing. Your dad said that you’ve spoken to people about fostering and adopting. What was that experience like?

Key: I just like helping people. Like the Duboses, I want to take a child in a foster in about 5 years. Talking to other people about my experience, helps parents and kids know that there are good outcomes for foster kids when you open your heart and just treat them like a human being. And I tell the children to be [grateful] but to also to speak up if they feel uncomfortable in their home. I know how it feels to be in a new home every few months or so and to never feel like you’ll have a home and family of your own. But “don’t let your past determine your future or present.” I’m a product of foster care and I’m proud. It made me the person I am today.

Seraaj: Would you take in an older child, like when the Duboses took you in?

Key: Yes, because the Duboses gave me a chance even though I was older. I didn’t think they would; I thought they were just going to take in my little sisters and I’d be in a group home. I’d love to take a chance on someone else and turn their life around.

Seraaj: Thank you so much for your time. Keep me updated. I’m looking forward to hearing when you finish your master’s degree.