The Loving Luggage Project Donates Its First Batch of Luggae 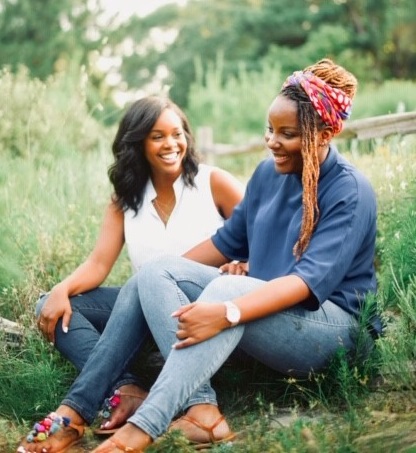 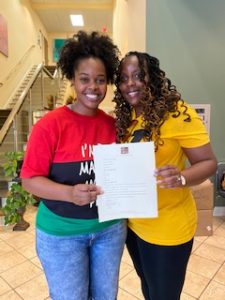 She wasn’t expecting to, but Julia Charles, Ph.D. began to cry when she and her fiancé Nicole Linen, Psy.D. dropped off more than 100 new, rolling suitcases stuffed with necessities, fun desirables, and hand-written notes for our agency’s youth in foster care. Charles says the process was cathartic for her, as she remembered never having a suitcase and only trash bags as a foster child.

Charles, who teaches 19th and 20th century African American literature at Auburn University, is a former foster child. Before finding her forever family, Charles lived in more than a dozen foster homes during the 11 years she endured in North Carolina’s foster care system. She remembers one day when a social worker was transporting her to a new foster home straight from school. The social worker tried to grab the trash bag that was filled with Charles’ belongings. The bag ripped. Schoolchildren in the hallway laughed and kicked her things around. She was devastated. Remembering how that felt is why Charles and Linen decided on procuring luggage to donate to foster kids.

“You put trash in trash bags [when] things are disposable and they don’t matter to you,” says Charles. “When you put your belongings in a suitcase, it’s because you want to protect them. You want them to arrive safely. You want them marked as belonging to you. Trash bags don’t have the ability to do that. That’s not what they were designed for.”

They wanted new luggage to let kids in foster care to know they’re valuable, and specifically requested pieces with wheels because they knew it would be easier to maneuver for differently-abled youth. “We decided on new luggage on purpose, because if foster kids get things, they’re usually used things,” stated Charles.

Originally, they planned to only donate 20 pieces of new luggage as an alternative to receiving wedding gifts. When they began registering for their wedding, they realized they didn’t need anything. Knowing that people would still want to show their love, they deiced to ask for luggage donations for youth in foster care, also as homage to Charles’ upbringing. 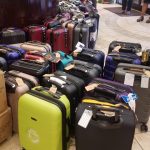 The Loving Luggage Project has CashApp and PayPal accounts set up for those who’d like to donate funds to the cause. | Photo by R.J. Streety 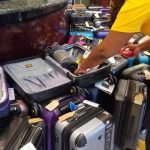 ” I never had anything besides a trash bag,” Charles recounts.”Most foster kids will tell you their trash bag story.” | Photo by R.J. Streety 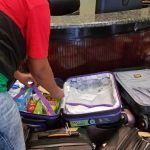 Linen says they decided on this project quite quickly with a 20-minute conversation and worked out the details soon after. | Photo by R.J. Streety 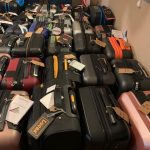 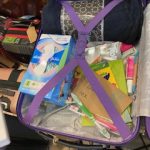 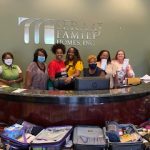 The Loving Luggage Project is part of our village that seeks to provide children from every facet of life with the love and dignity. Photo by R.J. Streety

“We want to make sure the world is a better place because we are getting married,” Charles explains.

The intended 20 pieces of luggage grew to 40, then 60, and before they knew it, they had attained more than 100 pieces of new luggage to donate. Thus, they quickly realized this would grow into something major and decided to turn this one-time project into a charitable organization. Linen, who is a clinical and sport psychologist working as the behavioral health specialist for the Denver Broncos, taught herself how to create a website and had their site designed and functioning within 4 to 5 days.

“I don’t know many people who would take their wedding and make it about something bigger than them,” Charles says about Linen. “She often tells me there isn’t a thing she wouldn’t do to make me happy. Nicole loves me big enough to do this. It’s healing work; Her love saves me  often.”

In the spirit of love, their not-for-profit organization is called The Loving Luggage Project and aims to provide foster youth ages 3 to 18 with new carry-on luggage filled with items that are useful and enjoyable. They want kids in foster care to know that where they’re headed is just a  stop on the way to their destination of a forever family and that they have a right to protect their things along the way. They made it official in May 2020 to honor National Foster Care Month.  Although they started searching for On Tuesday, June 30, 2020, the organization donated its first batch of luggage to Seraaj Family Homes, Inc. to donate to throughout Alabama, where they’re based, they’re already receiving requests to start chapters in other states, including Texas, Virginia, and Oklahoma.

On Tuesday, June 30, 2020, the organization donated its first batch of luggage to Seraaj Family Homes, Inc. Linen and Charles gathered with their friends—”all of whom were Black female feminists,” Charles pointed out—to fill each piece of luggage and transport them to our headquarters in Montgomery, Alabama. The two say they chose our organization because of the authentic diversity they saw in our agency. They plan to continue to search for foster care agencies to donate to that have diverse representation.

More About the Couple Who Cofounded The Loving Luggage Project

Seeing diversity within the organizations The Loving Luggage Project is donating to originates from who the cofounders are. Linen and Charles are both Black women, proud feminists, and members of Black Greek sororities. Linen is a member of Alpha Kappa Alpha Sorority, Incorporated while Charles is a member of Delta Sigma Theta Sorority, Incorporated.

Furthermore, they’ve also shown who they are in their work. Linen, who received training in general and multicultural psychology, was the founding faculty advisor for Black Women in Mental Health at Auburn University, a graduate student organization aiming to increase and promote mental health awareness in the Black community. As stated earlier, Charles is a college professor of African American literature at Auburn University, where the two met at a shindig.  Charles has used her passion and education to write her second book, That Middle World: Race, Performance, and the Politics of Passing, which is about how mixed-race people invented cultural spaces for themselves, specifically during the Antebellum period through Reconstruction. It’s set to be released on October 12, 2020 and is available for pre-order on Amazon.

Charles’ first book was Surviving the Storm: The Life of a Child in Foster Care, which is a personal account of her time in foster care. That chapter of her life began when she was about11 years old. She and her three older siblings were taken away from their biological mother due to neglect.

“I remember being taken away feeling scared that I wouldn’t see my siblings again but relieved to get away,” Charles recalls. “It wasn’t the best home to live in; It wasn’t a healthy or safe environment.”

Although momentarily relieved, Charles didn’t know what to expect from the foster care system. She says she had never even heard of the term “foster care” before then. In her experience, she was placed in more than a dozen homes for more than a decade. At first, the homes weren’t so bad. But then she transitioned status from being “therapeutic” to a “traditional” foster child. She could tell the difference between the latter homes, which she says the quality decreased because the parents were paid less and thus cared less. During this experience, Charles battled depression, anorexia, and suicidal thoughts. 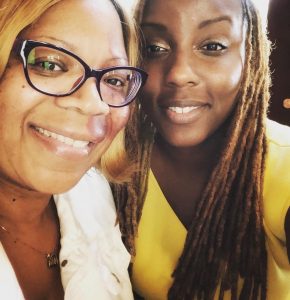 “She has one of the best laughs I’ve ever heard,” Charles (right) says about her mom Tutt (left). “It makes whatever else is happening so unimportant. Not many people whose smile or laugh can stop me in my tracks.” | Photo courtesy of Charles.

That tumultuous journey finally came to an end when she was 17. She decided to run away from her foster home and be done with the whole system, but first Charles called her friend from church to say goodbye. Her friend told her not to make any moves until the morning. That’s when her friend, Lorraine Tutt, offered to be her new foster parent. She was quickly given emergency custody of Charles and later became her official adoptive mother in December of 2005.

The two were already close but this new dynamic brought them closer. Charles remembers talking to Tutt almost every day, if not every night, on the phone after they became friends through their church. Although Tutt is only a little more than a decade older than Charles, she still took in Charles as her daughter. Tutt was the first person to enforce a curfew for Charles, made sure she improved her grades in school, held her accountable for her actions, and even showed up in Charles’ classes to learn alongside her so she could better help Charles with her work. Tutt has done so much more, and it’s natural for her.

“She doesn’t even see anything she’s done as remarkable,” Charles exclaimed. “It’s nothing special for her to have loved me like this. She’s one of my best friends.”

It’s this kind of effortless love that bonds Charles and Linen, also. “She taught me how to be a bigger person for myself and other people; She’s taught me how to love bigger,” Linen says about Charles. Their love, which they’ll be making official with nuptials on April 3, 2021, is what brought the world The Loving Luggage Project.