“You are the one,” Voncile Swoopes was told by her mother. Her mother is now deceased, but Swoopes remembers when her mother asked her about being a foster parent during a car ride, about two decades ago. Her mother said she had been watching TV and heard there was a need for more foster parents, and she thought her daughter would be a perfect fit. Her mother told her she’d noticed Swoopes’ love for children since her daughter was a child herself, Swoopes recalls. After much research and prayer, Swoopes became a foster parent for Seraaj Family Homes, Inc. She’s been with the agency for 18 years.

Swoopes says fostering is her calling and is a ministry for her. She says children bring her joy, uplift her, and enhance her life.

“I know it’s my calling because I’m still in it,” says Swoopes. “If it wasn’t, I’d be done. The most important thing in my life is caring for kids.” 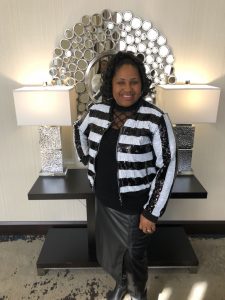 Swoopes has been a nurturer since she was a child. She’s the eleventh child of 14. She says she enjoyed having a large family and being surrounded by kids. Swoopes remembers her older siblings being protective of her, just as she was protective of her younger siblings. She recalls her mom and father teaching her and her siblings to always look out for each other, and now she’s doing that for others’ children.

Swoopes, 59, says she’s fostered so many children through the years, she’s lost count of how many she’s taken in. But for Swoopes it’s more than just providing a safe space for kids in foster care. She teaches the youth she cares for about family, self-love, prayer, unity, manners, giving back to the community, and always doing your best.

Before she can teach these vital concepts to the kids in her care, she must connect with them. She says she does that by letting them know they can come to her with anything they want to discuss. She also listens to them as much as she talks. She even yields to some of their wants so they know their desires are important. She makes time for them, she plays with them, and she’s patient with them.

“It’s not easy,” says Swoopes, a resident of Birmingham, Alabama. “Some people think it’s easy, but you have to give. It takes time [and] patience. You have to set aside your life sometimes to work with the kids in order [for them] to succeed in life.”

She’s gone through foster kids damaging her home, being reminded by children that she’s not their parent, and she’s navigated their rebellion and anger. In these times she says she’s patient, communicative, sympathetic, compromising, and encouraging.

Seeing her kids’ progress is what keeps her motivated, she says. Whether it’s simple like enhanced manners or more miraculous like improved health conditions, no progress goes unnoticed or unvalued by Swoopes.

She reminisces about a baseball game she and her kids attended in Huntsville, Alabama in June 2019. She says a woman from the concession stand came to inquire about who were the parents of a little boy she had just served. Swoopes took responsibility for her foster son and asked what he did. But the woman only wanted to praise the boy for his impeccable manners.

“My kids come out of my home very mannerable,” Swoopes says.

If her foster children end up going back to their biological family, which is Swoopes hopes is able to happen for the youth in her care, even some of their parents have thanked her and acknowledged her for improving their child’s manners.

“You have to just treat them just like their yours,” Swoopes says.

That kind of impartial care and love has led to one of Swoopes most miraculous success stories. Years ago, Swoopes was entrusted with the care of a medically-fragile 14-year-old girl. Swoopes received her straight from the hospital. Swoopes says she was headed to a nursing home. The girl was blind due to a brain injury and her doctors said she’d never see again. Swoopes remembers her foster daughter being depressed. But eventually, the girl’s eyesight came back. She stayed with Swoopes until she turned 21, then she was able to return home. Swoopes say she’s still in contact with her former foster daughter.

“I just thank God I had the opportunity to have her in my home and to care for her and to love her,” Swoopes says.

Swoopes speaks lovingly about the other youth that have passed through her home and says she and her family always miss them when they go back home.

“My oldest grandbaby would say, ‘Why do they have to go home? I thought that you were their mother?’ What he means is their adoptive mother. But we are family. I would like to be in their life, [but] it depends on the family that they are going to if they allow them to keep in touch.”

But when youth can go back to their biological families, Swoopes is elated for them because “there’s nothing like family,” she says.