The Past, Present, and the Potential of Using Virtual Gaming as a Clinical Intervention Tool at Seraaj Family Homes, Inc. 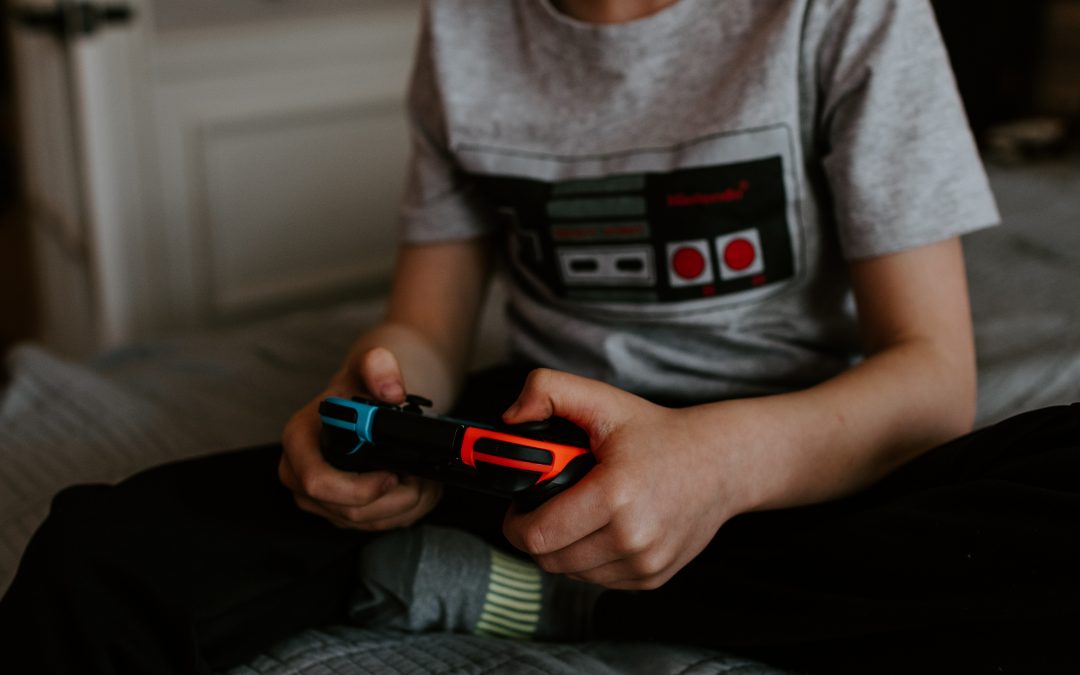 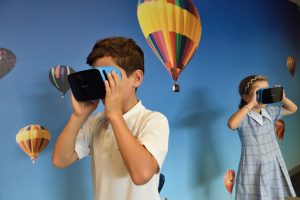 Photo by stem.T4L on Unsplash

Virtual gaming, virtual reality (VR), augmented reality (AR), and other forms of technologically-simulated circumstances have been proven numerous times to be an effective clinical intervention tool for those with special needs, spanning from behavioral issues like defiance to physical conditions like deafness. In June 2019, an article was published reviewing a host of scholarly articles on the use of AR in the rehabilitation of people with disabilities. It concluded that AR was useful in treating trauma, developmental disabilities, cognitive impairments, motor impairments, and physical disabilities.

However, it was also stated that “companies, governments, and researchers should consider making more efforts to integrate virtual environments with more types of disabilities [in mind] that will lead to deeper analyses” to better assist people with special needs. This technology is still relatively new to the public. The possibilities of using such technology in this way are still being discovered. Seraaj Family Homes, Inc. (SFH) is one of the agencies implementing this technology to continue exploring the ways in which virtual gaming can assist its clientele.

In recognition of September 12 being National Video Game Day, here’s an exploration of the company’s past, present, and plans concerning virtual gaming as a clinical intervention tool for its youth in foster care.

The Past: How SFH Was Introduced to Computers 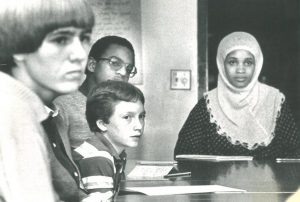 Nadiyah Seraaj, cofounder of SFH, as a family teacher for Boys Town in Omaha, Nebraska

It was the early 80s and Abdul Seraaj, CEO of SFH, was working as a Family-Teacher (a sort of foster parent) with Boys Town in Omaha, Nebraska. One day, a man, who Seraaj only had met a couple of days before, pulled up with a truck and rang the doorbell.

“They brought in computers, all this equipment, and paper,” Seraaj recalls. “[He] set up my whole office. Back then, only certain people could use the internet [like] universities, the military, and librarians. He gave me access to everything as a gift for working with his little boy, and that’s how I got started.”

The boy wasn’t a displaced child in Seraaj’s care. He was a boy who’d befriended the kids in Seraaj’s home.

“Coming from the South, I just made him part of the family,” Seraaj laughs. “He just fit in. We went on outings [and] he was included. If I directed the boys to do a chore, he had to do it too. He was treated just like a family member.”

One day, the boy’s father came to visit, in search of “the man who had such a positive influence on his son,” says Seraaj. The father acknowledged his son’s grades had started improving, his peer relationships were thriving, and he no longer had behavior problems at home. Seraaj told the father he had only witnessed positive behavior from the child, and he especially noticed that the boy was highly skilled in operating computers. In fact, it was the boy and the other children who had taught Seraaj basic computer literacy. So, it made sense when Seraaj found out the boy’s father had a Ph.D. in computer science and headed the computer department for Boys Town.

Seraaj says after that he never stopped growing the company technologically and using technology as a way of connecting with children. “After I left Boys Town, I used that knowledge to get way ahead of anybody in the behavioral health care field,” Seraaj attests. 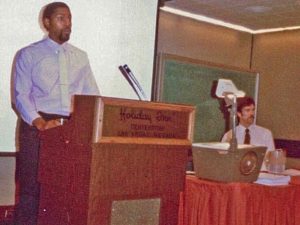 Abdul Seraaj and Ray Burke conducting a workshop on “Using Computer Technology As a Clinical Intervention Tool” for youth in foster care.

The evidence of that was visible early on. In 1983, Seraaj and Ray Burke, Seraaj’s friend and coworker at Boys Town, attended the National Family Teachers Conference in Las Vegas where they conducted a workshop called “Using Computer Technology As a Clinical Intervention Tool.” It was a presentation on how they were using computer applications and games to work with foster kids, primarily teen boys, in dealing with impulse control and other things relating to their behavior, details Seraaj.

Fast-forward a decade later, in1995, the Al-Hajj, Inc. and Seraaj Family Homes, Inc. Training Institute was founded to enhance the skill levels of both SFH employees and the children they serve. Since then, some of SFH’s employees, from social workers to therapists, have been using virtual gaming as a clinical intervention tool, just as Seraaj started doing when he founded the company in the early 80s.

The Present: How SFH is Using Virtual Gaming

One such person is Ruth Staggs, a case manager for SFH in Oxford, Alabama. She says she’s officially been working with virtual reality for two years and unofficially for five years. She was first introduced to VR a few years ago when she was attending a community college. The school was using VR sensory technology for nursing students to help them to understand what an individual with schizophrenia deals with.

Now she’s using what she’s learned with her clients at SFH. Staggs, who loves roller coasters, uses VR for personal leisure. She says she has about 20 roller coaster games. She also uses it to help her friends with such issues as agoraphobia.

Staggs says she has a client with Autism who loves superheroes, so she found a VR superhero game that helps him with his sensory overload. The expectant outcome is to desensitize him so he and his family can start attending more activities like sporting games and enjoying fireworks.

Also, she’s used VR to help a child who wants to play sports but doesn’t think he’s capable because he’s heavyset. Thus, she uses VR sports games to help him have fun and build confidence in sports while exercising. 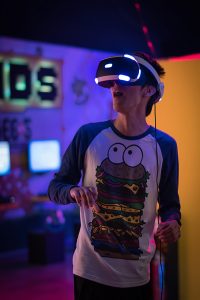 Photo by Uriel Soberanes on Unsplash

Ruth also shares about an experience using VR with a client who was placed with the agency due to a receiving a DUI. She says he had continual issues with drinking. One day, he was in an accident while he was under the influence. His pregnant girlfriend was in the car and had to be taken to the hospital. After that, Staggs used VR glasses on him to help him understand the effects and consequences of his decisions.

“When he took the glasses off after about 10 minutes, he went to the bathroom and threw up,” Staggs illustrates. “He [said], ‘I didn’t realize how drunk I was. I could’ve killed somebody.’ And that was his first reality to understanding. So, he quit drinking when we did that video.”

Another professional who’s leading the way in using virtual gaming as a clinical tool at SFH was Volece Bossie, Ph.D., an assistant professor for the College of Health and Sciences at Alabama State University. SFH contracts with Bossie to write treatment plans and assessments through her company B.E.C.T. (Behavior Education Consultation and Training) Services. Bossie is also a former SFH employee who worked as the regional manager for Oxford and Anniston, Alabama.

Reminiscing about her time using VR at SFH, Bossie says she saw the most change in children who already liked gaming and who were highly competitive. She says, then the games were able to be used as rewards and to teach kids about patience, sharing, and coping mechanisms.

“These skills [were] still addressed in therapy sessions to have someone help them reframe the thoughts that they’re having about losing so they can have that experience and it not be such a negative [one] or emit aggressive behavior,” relays Bossie, who has her licenses in social work and professional counseling.

But there are even more ways in which virtual gaming can teach children. Bossie has used virtual gaming to teach kids time management skills, independent living skills like completing chores, and even about hygiene. She suggests using games that are already on the market that are familiar to the child being treated since treatment should have a leisurely component to it, according to Bossie.

“A lot of times, kids can relate to things, but they don’t necessarily like having someone fuss at them or feeling scolded,” explains Bossie. “Being able to address things in a natural manner as they occur in a game comes across better to children, whether it’s in a comical way or just helping them draw attention to the things that [must be done] in real life.”

Seraaj says this is exactly what he preaches to employees working with adolescent clientele. “I tell the staff, ‘You spend hours and hours trying to talk to a kid asking questions that too many other people have tried to ask them,’” exclaims Seraaj. “‘They’e tired of it. Find another way to reach the kids.’ And it [virtual gaming] works.”

Seraaj even has seen how VR has assisted him with just getting to know his customers. When he’d visit the company’s various regions, wanting to get to know the children in care, he’d bring out his iPad, turn the volume up to the max, and start playing Angry Birds. The kids would swarm him.

“They would line up to talk to me and would want to play with the game,” says Seraaj. “I go through this behavior teaching: I said, ‘No, you have to introduce yourself to me. You just can’t come and play my game. What’s your name? [Let’s] have a conversation.’ And that’s how I used to get to know my kids.”

That was an example of VR being used as a socialization tool. A similar type of introductory technique is used to assess a child’s needs.

“It’s figuring out what deficits the kids have, thinking about the types of games they are interested in, and then researching to see which kind of skills can be developed using those particular games,” says Bossie.

The next step would be adding virtual gaming to a child’s individualized treatment plan, which is exactly the standard Seraaj plans on implementing at the company. “If there were skills or goals and objectives in the child’s treatment plan that we felt could be accomplished through a gaming platform, then we added those interventions to help address the goals and objectives that we wanted to meet,” says Bossie.

Plans & Possibilities: How SFH Plans to Implement Therapeutic VR as the Standard 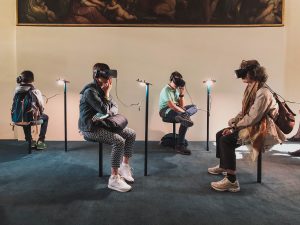 Photo by Lucrezia Carnelos on Unsplash

“Here is the vision: Our goal is to make virtual gaming systems a clinical tool for working with children with special needs,” illuminates Seraaj. “The way you make it a clinical tool is you have to write it into the psychosocial assessments and put it into their treatment plan.”

Seraaj says there’s lists of games for every different type of condition a child is dealing with, from Autism to Dyslexia. He wants to make sure that SFH is making learning fun for its children in foster care, so they don’t even realize that they’re in therapy.

This method would also keep the company aligned with modern trends, so employees can more easily relate to their young clients, who Seraaj describes as digitally-minded. Seraaj says he “wants to meet the kids where they are”—in the 21st century. 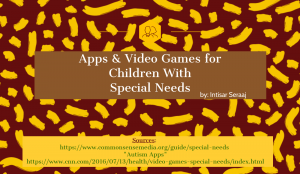